Founded on October 17, 1966 by Francis and Charles Higa, Zippy’s Restaurants has grown from one restaurant on King Street in Honolulu to 22 locations all over Oahu, and locations on the neighbor islands of Maui and Hawaii (in Hilo).
If there is one thing you must try at Zippy’s Restaurants, it’s our Original Recipe Chili. Served since 1966, it’s our signature product! Over 100 tons of our chili is sold every month through our locations, through fund-raising activities, and in retail markets in Hawaii and beyond. Other favorites include our popular golden fried chicken, our famous Zip Pac®, oxtail soup, saimin, and much more! Since most of these items are available 24 hours at most of our locations, any time is a good time to enjoy Hawaii’s favorite foods!

In following the legacies of our founders, Zippy’s Restaurants is committed to being the best neighborhood restaurant in Hawaii, where your favorite local foods are prepared, served and appreciated so much that you leave with fond memories. We are committed to creating your favorite meals served with genuine care in a safe, healthful and friendly atmosphere that you can enjoy. So make your next stop, Zippy’s!

Visit our website for the nearest restaurant located by you

Franz Shiro Matsuo wanted to own his own restaurant. In 1969 at the ripe age of 52 Shiro opened Shiro’s Hula Hula Drive. The word was out that there was a wacky Japanese man who made pretty good local food.

Eventually he outgrew the Aiea Bowling Alley and in 1975 he relocated to the Waimalu Shopping Center. Shiro changed all that by creating an adventure in saimin dining and giving birth to SHIRO’S SAIMIN HAVEN. He was the first to introduce vegetables in saimin. He was the first to create a myriad of saimin combinations. The restaurant boasts 65 different versions of saimin, along with a variety of local favorites. Shiro was also the first poet and ukulele-playing chef. He wrote thousands of poems as ads in “Dining Out”. These poems were about life and about people – none of them about his own business! He loved to play his ukulele and made several cd’s!

Shiro’s daughter Linda took over operations in 1990. Linda’s son Bryce is grooming to take over. Another son Joshua has been running the Shiro’s noodle factory for over a year. The youngest son Gavan has decided to get involved, also. Shiro’s is a 3 generation family business.

Shiro’s Saimin has 80+ employees to carry on Shiro’s goal of providing tasty food in a friendly family setting. We serve a full breakfast, lunch and dinner menu with local style comfort food offerings such as burgers, beef stew, laulau, and tripe stew. We have been in business for over 47 years and are committed to our island ways. Come for a piece of aloha along with your food. Our loyal and kind customers sustain us and we like to think of it as karma. The good effort you put out will come right back to you! 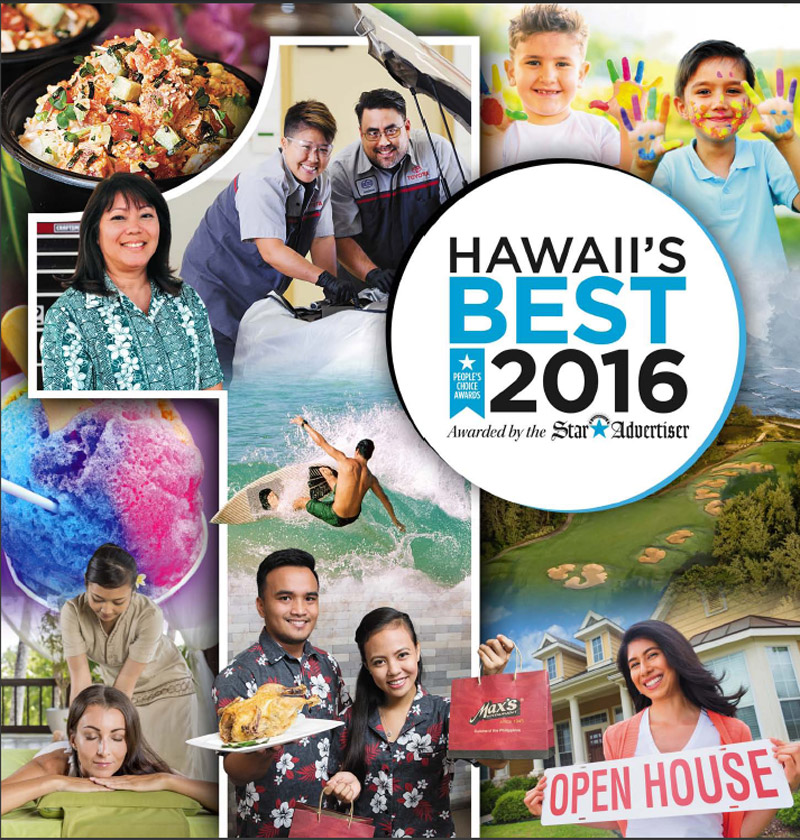 When it comes to celebrating all that Hawaii has to offer, the Honolulu Star-Advertiser stands at the forefront of honoring the Island’s best. In this special section, we proudly present this year’s collection of “Hawaii’s Best” awards - as determined by you, the people.